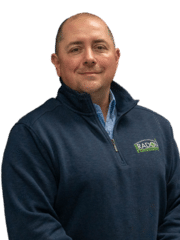 Tim was born and raised in Lansing, IL and is a graduate of University of Illinois at Chicago. His degree was in accounting and he spent about 15 years working in accounting, finance, and small business consulting at firms such as Grant Thornton and Morgan Stanley. By 2015, he was living in Crown Point, IN with his family and was looking to make a change to get out of the corporate world and decided to start his own home inspection company. Tim had grown up learning home improvements from his father and had put himself through college doing trade work, and this background combined with his business and accounting knowledge made owning a home inspection company seem like a strong fit. By May 1, 2015, Tim launched his inspection business, Pillar To Post Home Inspectors: The Tim James Team, operating a franchise with his wife, Laura, out of Crown Point that services five counties throughout Northwest Indiana. Pillar To Post took off very quickly and soon became the largest home inspection company in NWI and the fastest growing franchise in Pillar To Post history, winning many awards and a lot of accolades along the way. By doing so many inspections, Tim was very aware of the importance of radon testing and knew that there was a need to have a reputable radon mitigation company in the area. So in 2020, Tim and Laura decided to start NWI Radon & Environmental to help service clients in NWI and the greater South Bend area.

Tim and his wife, Laura, have lived in Crown Point since 2013 and love being residents of The Region, as well as local business owners. They also have three daughters – Avery, Dylan, and Haven – who are the light of their lives. When Tim and Laura have spare time, they love spending as much time as possible with their daughters swimming, vacationing at the beach, and cheering them on at their various sports and activities. Tim also enjoys watching professional and collegiate sports, as well as building furniture.

Before and after photos from jobs I've worked on:
Back to Previous Page Back to Meet The Team

We serve the following areas